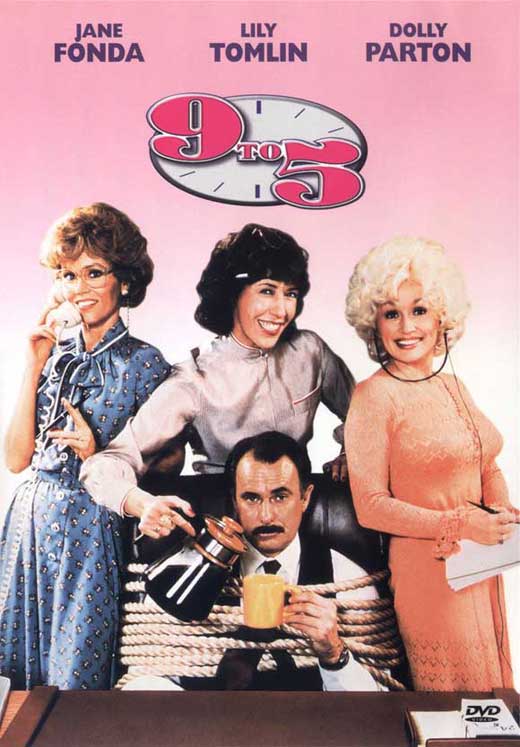 First things first, Dolly Parton is awesome. Jolene is an absolute banger and the titular song 9 to 5 is great as well. Adding to that, Parton has been, as far as I’m aware, a tireless advocate for marginalized folks despite her privileged and wealthy status and just a rad person.

So watching this film was a bit of a disappointment, sadly.

The film consists of three women: Jane Fonda as Judy Bernly, Lily Tomlin as Violet Newstead, and Dolly Parton as Doralee Rhodes. The standout for this film is  Dolly Parton who surprisingly makes her film debut here but her experience singing and performing shines brightly. Parton’s character comes off as immediately likable, trustworthy but still sassy and intelligent. Almost no other character seems to get the amount of attention she does, even Jane Fonda.

Given this film was a “star vehicle” for Parton, that shouldn’t be a surprise.

The story is simple…at first. The biggest problem with the movie is that it drops its grounded narrative over what makes work so awful for women during this time period (1980s) but immediately disposes of it as soon as it can. It eventually becomes a completely fantastical romp in revenge, blackmail, kidnapping and much more.

Now, it is a comedy film and I figured it was something like that going in. Obviously I’m fine with comedy movies being ridiculous but only up to a point. Eventually you either get back on track with the theme or message you’re trying to import to the audience or you risk losing both elements of what you’re trying to make. Sadly, such is the case with Nine to Five, which boasts a promising first half only to completely flub most things in the second.

The plot concerns three women trying to get revenge on their boss for being a “sexist, egotistical, lying, hypocritical bigot” which is an admirable cause. My dislike of this movie isn’t fueled by the main plot’s hook which I think is great and sorely needed within films. But more so how its executed with “series of misunderstandings” trope that could have easily been resolved if any of the characters had bothered to stop and think for a second and double check their work.

The good news is that when the movie does seriously tackle issues such as sexual harassment, sexism and even sexual assault it does so with care and finesse. But these things are just to set the foundation for an all-too predictable plot that I saw coming a mile away. The movie eventually loses its charm and its work-critical zeal becomes ludicrous and laughable.

Again, I have no issue with comedies of all genres using ridiculous tropes. I could forgive the “series of misunderstandings” comedy trope if it actually led to something interesting but sadly it doesn’t. And the plot continues to get more ridiculous based on a mistake I don’t find believable.

There’s things to like about this film; the dialogue is often sharp and witty, making me chuckle or even full-on laugh at times. In the early-goings I had a loose attachment to all three of the main characters and their dreams of revenge on their boss. But pointless plots that even the main characters agree are “useless” bog down what would otherwise be an enjoyable movie.

Another problem with the movie is that, by the end of the film, you realize that much of the “reforms” that Judy, Lily and Violet are able to help enact are while revolutionary for their time, these days are passe’. Arguably, that’s a good thing! But it also makes the film lose a lot of its zeal for me when it ends with notions such as “work share”, “childcare” “flexible hours”, “part-time work options” “alcoholics program”and doesn’t do anything structural or systematic. Especially when one of the women complains that “it’s the same all over”. On the other hand, by the end of the film they say they’re “just getting started” so perhaps there’s some hope yet.

To be clear, I’m not saying those changes aren’t good or don’t matter! The kind of place that Consolidated turns into by the end of the film is a inarguably a better place, but it’s also a place led (somehow) by Girl Power and this is implied to fix the issues of the workplace. As many of us know, the issues of work can’t be solved by putting women in power, the power is the problem.

Then again, it isn’t like I expected Comrade Dolly to abolish the workplace (what would that do anyways?) or seize the means of production for the workers collectively instead of for herself and her friends. Ultimately, this movie, like many other movies, uses our distrust and dislike of bosses that many of us share to propel a ridiculous strategy for slightly better conditions. And by the way, the strategy only works because it increases productivity and the chairman (a man) approves.

I’m curious what kind of message the cast and crew think they’re sending here. You can only improve your workplace if you live by the rules of others? Progress can only happen if the chairman is happy? I know the move is to partially explain how these changes take place (except for equal pay, that’s said to be a no-no from the chairman) but it sends a bad message.

None of this is mentioning the breakneck speed at which the film gets rid of plausible obstacles to the women’s schemes and especially during its epilogue. There’s some slightly offensive stuff I found in here but this film likely ages better than 90% of 80s films. There’s a joke sequence about the “boss getting a taste of his own medicine” with regards to sexual harassment and assault that I didn’t appreciate but other than that a few tropes or words, it wasn’t as bad as you’d think.

Overall, I just recommend you listen to the song. It’s better, has a more radical message and makes me wonder if the film dilutes Dolly’s beliefs, as it certainly seems to.

If you enjoyed this movie review, consider making small monthly donations to my Patreon!

We aim to be a hub for distributing information on why work, as we know it, should be abolished.

Support me on Patreon!

Blasts from the Past!